Champagne Vs Prosecco Vs Cava Vs English Sparkling…

There’s always a certain level of excitement when you hear the pop of a cork and the fizz of a bottle of bubbly. It could be a birthday, New Years, an engagement, or increasingly a fab night out with the gang. Bubbles seem to make the night…pop! But what bottle of sparkling wine is best for you?

At Tom Browns Brasserie, we want to let you in on the secrets behind some of your favourite tipples so you know exactly what puts the sparkle in your sparkling wine! 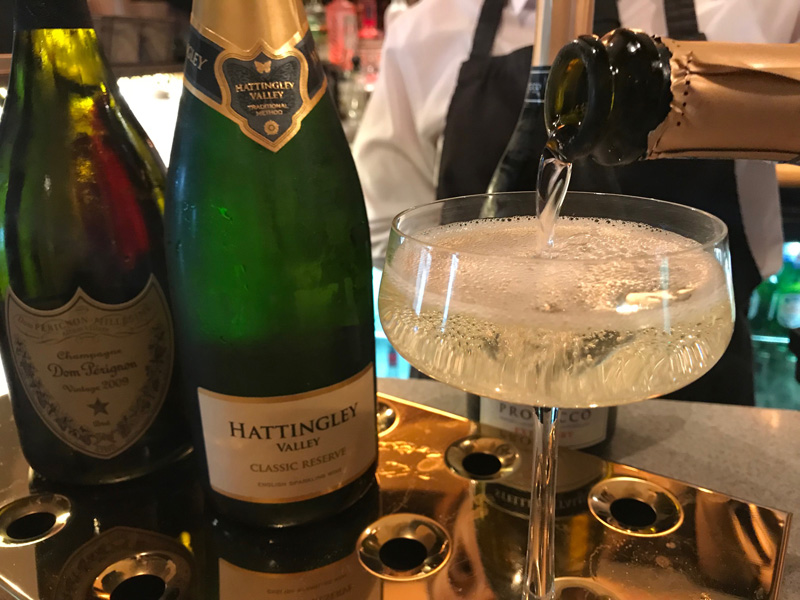 Lets start with a classic. Oozing class, sophistication and that old school Hollywood glamour - CHAMPAGNE is probably the best-known sparkling wine. One of the drier wines, champagne is made up of 3 grapes: pinot noir, chardonnay, and pinot meunier. If you know your grapes, you’ll know pinot noir and pinot meunier grapes both have red skins, so to get the light golden warmth of champagne these skins are removed before the juice can be included in the vinification process (the conversion of grape juice into wine). As we know, champagne is named after the region in which it is made, but champagne is actually one of the smallest wine producing regions in the world, covering only 76,000 acres of land. If you consider how much of the land you can actually grow wine on, there’s not much wonder why this product is dripping in exclusivity. Known for its ultra fine bubbles and dry taste, champagne has been the celebration drink of choice since the 18th century, increasing in popularity thanks to the French aristocracy, but today you can find a bottle of bubbles to suit almost any taste. From Moet & Chandon’s prestige cuvée Dom Perignon, Veuve Clicquot’s Rosé Champagne and the stunning Bollinger’s Vieilles Vignes Francaises 2006 vintage, its no wonder champagne is considered the diamond of the sparkling wine world.

If, like me, you love a wine that’s not quite as dry, you need look no further than PROSECCO. Italian born, the drink was first made using the prosecco grape (whose namesake comes from the village of Prosecco, near Trieste in Italy where the grape was found), but is now known as the glera grape. Prosecco isn’t made with the glera alone, but can be made up with just little of verdiso, chardonnay, pinot grigio, pinot noir or pinot bianco grapes too. Unlike champagne, prosecco isn’t limited to one region where it can be made, which makes the drink that bit more affordable, the most affordable being the Prosecco DOC, which can be made in nine provinces that span the Veneto and Friuli Venezia Giulia regions. Prosecco DOCG can only be made in the Treviso province of Veneto, and the most exclusive prosecco, the Asolo Prosecco Superiore DOCG, can only be produced near the town of Asolo. Known as being much less dry and easier to drink than it’s French counterpart, prosecco has seen an incredible surge in popularity since the 1990s, and in the mid 2010s the UK became the biggest export market of prosecco, consuming one quarter of the entire Italian production of the drink! Some excellent proseccos include the Prosecco La Gioiosa DOCG and Casa Belfi Prosecco Col Fondo Frizzante.

One wine that’s making a fantastic comeback is our old friend from the 90s, CAVA. Once known as the cheap go-to if you’re strapped for cash, Cava has come on leaps and bounds since it first donned our shelves, thanks to a tightening up on regulation on how the drink was made. In 1986 it was agreed that cava could only be cava if it was made in one of 8 districts (the village of Aragon, the Basque County and Valencia to name a few), however a whopping 95% of the wine is solely produced in Catalonia. It was originally known as ‘Spanish Champagne’ and is still locally called ‘champán’, but took on the name ‘cava’ (meaning cave or cellar, where the wine was originally aged and preserved) when Spain joined the EU. Similar in dryness and taste to champagne, it’s easy to see why the French would want there to be a distinction between the two wines, however thanks to the mechanization of tirage (the rotating and tipping of the bottles in the second fermentation process) and the quicker fermentation period, cava may give you a similar flavour but it certainly comes without the hefty price tag.

If you prefer shopping local there are some incredible English sparkling wines that really stand out on the shelves. With the acres of grapevines planted in England and Wales rising by a whopping 135% and the French champagne house Tattinger planting their own vineyard in Kent, Great Britain is a true contender in the sparkling wine market. Even though this may seem like a recent turn of events, Britain is actually the true home of sparkling wines, thanks to 17th Century entrepreneur Sir Robert Mansel. With a hand in the glass making industry, he decided to replace traditional charcoal with the hotter burning coal, producing a much stronger glass. This in turn made extremely strong bottles, which were then sold on to innkeepers and pub owners alike. When they then received the wines that were traded into Britain and bottled them up, some of the unfermented sugars (thanks to winters being much colder in the 17th Century) began warming back up, causing CO2 production and turning the once still wine sparkling! Give Giffords Hall Sparkling 2013 wine a go, a wine full of depth with delicate floral notes, and see what East Anglia has to offer.

So when you’re looking for a fizzy number to make your evening go with a bang, maybe try something a little unusual. If you want to try something less dry, you’re ready to splash a little cash or interested in a tipple from the true home of sparkling wine, check out some of our links and pick the best bottle for you!